A Successful Operation On Your Child Is Always A Wonderful Thing 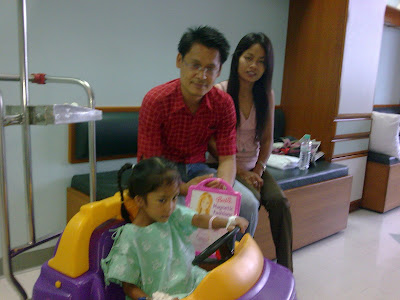 My friend Choophong is a good guy. He’s closing in on forty, been a lawyer for more than ten years. Last year he got a Master of Laws degree from my university, I was one of the professors involved. He and his wonderful wife Somjai are country kids from way out East, proof that brains and hard work can get you a good life in Thailand, they started out in big, poor farming families with hardly pots to piss in.


They actually worry about me, it’s very sweet. I live a quiet life in Thailand, far from my family, whom they honestly and correctly believe that I love and miss very much. My predecessor Farang Law professor was also a California lawyer with a sadness in his heart that just wouldn’t quit, and he ended up throwing himself, or being thrown, off a high balcony, it’s a long story. Choophong and Somjai took this as a lesson in human behavior: people disposed to sadness, far from home, and alone, need watching and can use a little attention. I thank God for them.


Their daughter is five years old, and she’s had more experience of the hard-knocks world than most. She just had her fourth heart operation, as in open-heart, I’m no doctor, I don’t know what they were doing in there but I can see the scars.


If her dad had not clawed his way up to a very good income she’d be dead already, and, in fact, if her dad was not such a great guy her days would be numbered even now.


Thailand, to some degree, has socialized medicine. Doctors, nurse time, and hospital beds are available to average citizens at little or no cost. But there are catches, lots of them. Medicine? Not covered, it’s pay or die. Doctors come in all sizes and stripes, this is a country where you go to college and major in medicine and after four years, poof! you’re a doctor. And the pace of the provided medical care can often fall way behind the pace of your illness. Get in line, brother, there’s lots of sick folk out there.


Luck is a funny thing. I honestly believe that most instances of luck are self-generated. Or, in this case, generated by our dads.


Choophong is such a decent man, so genuine and friendly, that he takes an interest in other people and tends to try to help them if he can. Bear in mind that he is an experienced Thai lawyer, his help is really worth something. So all through his daughter’s health problems he has gotten to know the doctors involved, he has listened to them, and he has sometimes identified problems of theirs, and he has helped them whenever he could. So they naturally like him, he’s a real likeable guy. And, human nature being what it is, some of them have tended to help him when it was in their power to do so.


And that’s what happened. When monolithic “Thai Medicine” was telling him that his daughter could wait until she was twelve for her next operation, which is “Asian-Speak” for go home and die, Choophong’s daughter just had her operation in the best hospital in Bangkok, Bumrumgrad, one of the two “International Hospitals” in Thailand, staffed with American-Board-Certified doctors and full of Americans seeking bargains, and prosperous Emirates Arabs, etc, come to Thailand for the “bargain” priced world-class doctors.


And the prognosis is: very good indeed! I visited her today, and she is already back to her old self, jumping out of bed and walking around, having some fun, four days after her operation. The doctor, who really appreciated the tax advice, says that this should be her last open-heart surgery, she should be fine after this. They scratched each others backs on the price too, big time.


One more happy story in a less than perfect world.
Posted by fred c at 3:33 AM