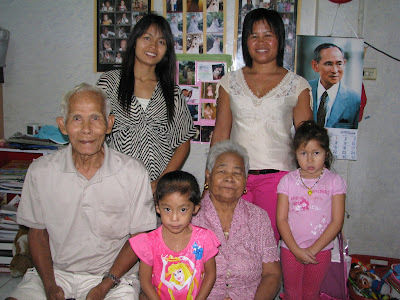 This old couple is in the running for the most successful procreational unit in the world. Grandpa is now eighty-four; Grandma is eighty. They had fifteen children together, eight girls and seven boys. And those children now have lots of children of their own, and so forth. I didn't hammer it down all the way, but it's a lot of offspring.
Also in the picture are two of their daughters, and two grand-daughters, plus the King, a fortuitous accident. A son-in-law explained it all to me: back in those days there was no television and no electric lights, so when it got dark people went to bed and, well, things happened.
Their age is another story. Almost nobody in Thailand gets this old. They both seem pretty healthy too, Grandma in spite of a couple of by-pass operations. Grandpa still smokes cigarettes, even, though very few at this point. The helpful son-in-law explained to me that out in Surin, way out in the woods where they live, lots of people make it to ninety and beyond. He attributed this to the lack of chemicals in the food.
Posted by fred c at 1:09 AM