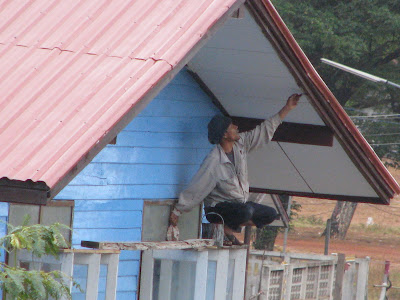 We saw this from our hotel in Amnat Charoen, a province way out East in Issan that is so poor that there is literally only one traffic light in the entire province.
It looks to me like six wooden casement windows in two groups of three, opened all the way, with one by six's balanced on the tops of each group and a long two by six set to cover the long space in between. This genius is using it all as a scaffold to paint some hard to reach spots.
He was out there for quite a while, moving from end to end. We thought that it was a supremely bad idea, but to be fair the boards and the windows held up fine.
This in a country where all workers assume the risk of injury on the job.
But I shouldn't be surprised, really. I have always thought that Thai workers did a very good, solid job on whatever it was that they were making. These windows were hung up there to last.
Posted by fred c at 4:27 AM

JEEZ: Did some quick off-the-cuff calculations based on what I could see in the picture. The 1x4 on the left (under the 2x6) is distributing some of the load. The span of the 2x6 is distributing much of the load. I don't know what type of hardware the "window system" incorporates, but it seems to me, that the sheer stress (even under static conditions) is significant at the top window connections. The window frames look as if they're 1x4s butted as opposed to 45 degrees. From what I can see in the picture, my conclusion is that the window frames and corresponding hardware are of a substantial "home-made" variety (or beefed up) as opposed to a standard commercial variety.

When the wind is blowing 150 miles per hour is a time when it's not cool to weight 120 lbs. When up on a scaffolding or climbing a tiled spanish style roof are times when it seems to be super. I don't remember why I did it but one time I got the urge to sit on top of the chimney at the Berryman house so I took off my shoes and socks and climbed up the tree and up the roof distributing my 140 odd pounds as much as possible. Worked out fine.

Those frames aren't hinged in. They're sitting on the floor. the 1x4 is holding them together to make 2 boxes.